Coriander oil can make your married life heavenly. It arouses and increases the libido, as well as cures temporary impotency, frigidity of both males and females, erectile dysfunctions, and general loss of interest in sex.

Extracted from the seeds of Coriander. Coriander is a famous throughout the world as a spice and has a few well known benefits including digestive aid and a remedy for stomach ache.

Aphrodisiac: Coriander oil can make your married life heavenly. It arouses and increases the libido, as well as cures temporary impotency, frigidity of both males and females, erectile dysfunctions, and general loss of interest in sex. It stimulates certain hormones that activate the sleeping Cupid in you and puts you in a frisky or naughty mood that is ready for some bedroom fun!
Lipolytic: People who are fed up of trying all possible methods to lose weight need to pay attention to this property of coriander oil. It promotes lipolysis, which means hydrolysis of lipids, which in turn means hydrolysis or breaking down of fats and cholesterol. The faster the lipolysis, the faster you get slim and lose weight. The best part of it is that you don’t need to get liposuction, which has terrible adverse effects on overall health, and costs a fortune.
Antispasmodic: Tired of endless coughing? Are you unable to put your best effort into sports due to frequent cramping? Then it is high time for you to try coriander oil. It will relieve you of spasmodic cramps, both of the limbs and intestines as well as coughs. It will also prove beneficial in cases of spasmodic cholera. Finally, it also relieves nervous cramps, convulsions, and generally relaxes your body and mind.
Carminative: Coriander oil literally gives the gases built up in your body a healthy outlet. Only those who suffer from gas will know how it feels when you are finally relieved of it. You might be surprised to know that each year; many people die of gas, since it becomes particularly dangerous when it rises upwards, rather than downwards. It can cause severe pain in the intestines, stomach, chest and even in the muscles. It is a good idea to have a small tea spoon full of coriander oil and eliminate excess gas in your system. It won’t let additional gases form either.
Depurative: Coriander Oil cleans the blood of toxins and thus acts as a detoxifier or blood purifier. It helps to remove regular toxins like uric acid, heavy metals and certain compounds and hormones produced by the body itself, as well as other foreign toxins which get into the blood accidentally.
Analgesic: Components like Terpineol and Terpinolene make coriander oil an analgesic, which means any agent that reduces pain. This oil has been found to be effective for curing toothaches, headaches and other pain of the joints and muscles, as well as those resulting from injuries or collisions. It reduces pain by desensitizing the affected area.
Deodorant: Like coriander, coriander oil is a good deodorant. It reduces bad breath and eliminates mouth and body odor when used either internally or externally. When consumed or ingested, the typical aroma of coriander oil mixes with sweat and fights body odor as well as oral odor coming up from your stomach, filling your mouth. This also helps to inhibit bacterial growth in your mouth and around your sweat glands, thereby fighting odor. It can be mixed in water, then externally applied or used as a mouthwash to get all of these benefits.
Stimulant: It stimulates and warms up the organ systems and various functions going on inside the body. It stimulates hormone and enzymes secretions, digestion, excretion, brain functions and nervous system activity. It also fights depression and boosts your spirits.
Stomachic: It ensures good health of the stomach by regulating all stomach functions and toning up the stomach.
Digestive: Coriander oil has very good digestive properties. It gives prompt relief of indigestion and flatulence and its aroma also acts as an appetizer. 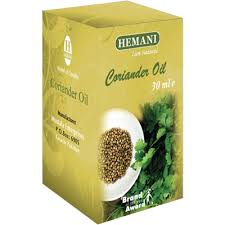 You're viewing: Coriander Oil ₦900
Rated 0 out of 5
Add to cart
Sign in Create an Account
Lost your password?
Select the fields to be shown. Others will be hidden. Drag and drop to rearrange the order.
Click outside to hide the compare bar
Compare
Wishlist 0
Open wishlist page Continue shopping