Fenugreek seeds are used in traditional medicine to treat kidney aliments and colds and to alleviate pain associated with arthritis. Several medical studies suggest that powder derived from the seeds may benefit auto-immune diseases such as arthritis. However, always seek the advice of a physician before starting any new treatment for a medical condition.

Trigonella foenum graecum, commonly known as fenugreek, has been widely cultivated for the culinary and medicinal values of its seeds. Experimentally, it has been demonstrated that the seeds possess antioxidant, anti-inflammatory and hepatoprotective properties. The powder has been subject of medical research to investigate and manage metabolic syndromes associated with arthritis and other inflammatory diseases.

Arthritis describes over 100 conditions involving damage to the joints of the body. Osteoarthritis, the most common form, is a result of trauma to the joint, infection, age or immunity-related disorders. Other forms of the disease include rheumatoid, psoriatic and septic arthritis. All are considered autoimmune diseases, where the body’s immune cells destroy its own tissues because of the breakdown of cartilage that normally protects the joints. Fenugreek has been shown to stall auto-immune disorders by acting as a mimic of estrogen, which is know to inhibit this condition. Therefore, fenugreek has been investigated as a possible estrogen replacement in the treatment of arthritis.

Fenugreek as an Estrogen Mimic

Estrogen-like compounds have been known to inhibit inflammation of tissue by activating pathways that counteract the effects of autoimmunity disorders. The June 2010 edition of the “Indian Journal of Medical Research” included a study that investigated the estrogenic effect of fenugreek to assess its capacity as an alternative to estrogen replacement therapy, which has been shown to treat inflammation associated with arthritis. The researchers found that fenugreek bound to estrogen receptors and acted as estrogen by influencing genetic activities and inducing the expression of estrogen-responsive proteins. The researchers claim to have provided evidence for estrogenic activities of fenugreek seeds as an alternative to estrogen replacement therapy in diseases influenced by estrogen such as arthritis.

The September 2010 issue of the “Journal of Clinical Immunology” included a study that investigated the pathology of increased concentrations of estrogen metabolites found in rheumatoid arthritis, RA, patients. The researchers used blood samples from RA patients and a healthy population of participants, as a control group, to monitor estrogen-dependent DNA activation. They found increased DNA activity in the RA patients as compared to the controls. The authors concluded that binding of estrogen metabolites to DNA might explain possible roles of estrogen-like compounds and act as an alternative indicator in the diagnosis of the disease.

Conflicting Report on the Therapeutic Effects of Fenugreek

Mutations of chromosomes lead to disruption of molecular processes and are often seen in arthritic conditions. In an article appearing in the May 2007 issue of the “Journal of Ethnopharmacology,” researchers used an aqueous extract of fenugreek traditionally used to treat inflammations and arthritis. Since arthritis is an autoimmune disorder, the toxicological properties and potential antimutagenic effects of fenugreek were investigated. The study showed that treatment with fenugreek extract significantly reduced the percentage of dead cells, but increased the frequency of chromosomal mutations. The authors concluded that aqueous extracts of the herb have neither protective nor antimutagenic activity, but rather a mutagenic potential leading to the development of other disorders.

There are no reviews yet.

Be the first to review “Fenugreek Joint Health” Cancel reply 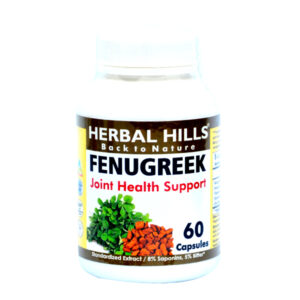 You're viewing: Fenugreek Joint Health ₦2700
Rated 0 out of 5
Add to cart
Sign in Create an Account
Lost your password?
Select the fields to be shown. Others will be hidden. Drag and drop to rearrange the order.
Click outside to hide the compare bar
Compare
Wishlist 0
Open wishlist page Continue shopping